It only seems right that I share the story of the day he proposed to me!

Being young and no kids, Nick and I would often run off to Niagara Falls for the weekend to drink and gamble. It was (and still is) the perfect mini vacation away from the day-to-day. A way to regroup and spend time just him and I. So for our 3 year anniversary we did just that. We usually stayed in cheap hotels but because it was our anniversary we splurged on a “fancy” hotel. The Sheridan by the falls. It was an awful room and definitely not worth the hundreds of dollars it cost but none the less, we were there to get away and it was clean and the bed was comfy! There was no balcony so every time Nick wanted to have a cigarette he would have to go down to the street. I being the most awesome girlfriend kept going with him for company. It was our anniversary after all! He was smoking a lot. I was getting tired of being the “good girlfriend” and finally told him he could go himself and I would start getting ready for the casino. I was a bit annoyed by his constant smoking and traipsing up and down the elevator to the lobby and he was in, what seemed like, a pissy mood.

So he went down, I went into the bathroom to try to doll myself up for the casino and only a few minutes later I hear a knock on the door. My initial reaction was ‘ughhh he forgot his key!’ Annoyed I went to the door and looked out the peep-hole. I couldn’t see anyone but then again I am short and could barely see out the peep hole anyway! So i opened the door.

And there, on bended knee was Nick….holding a ring.

I never bugged him to get married, hadn’t thought too much about it yet so i was stunned…I kept asking if he was serious and nervously laughing and smiling. It was a moment true to our relationship. Funny, awkward and undoubtably perfect. The ring of course was gorgeous, exactly what I could have dreamed of, minus the size. It was a tad big so my darling fiancé wrapped a LCBO receipt around the inside of the ring and slipped it on! I walked around the casino with a balled up fist terrified of losing my brand new sparkly ring.

We drove home the next day planning, picked a date, a wedding party and started the guest list! I’m a planner, this was my Super Bowl! 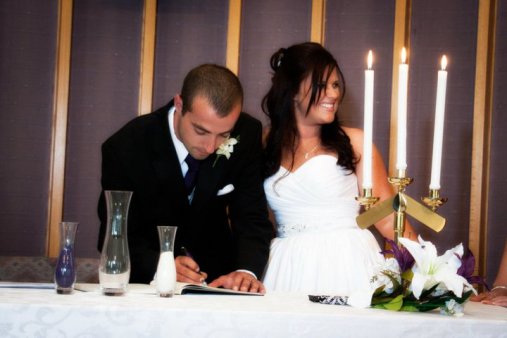 View all posts by Jules